Past Events in Christchurch

“Development of a conceptual model for recharge through loess soils”

In Canterbury, loess soils cover tens of thousands of hectares of land. Loess is windblown silt which originated from flood plains during lower sea levels. Aeolian processes transport the silt particles which were eventually deposited inland to mantle the landscape. 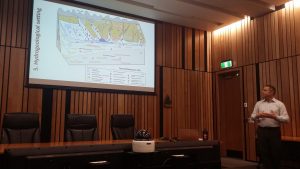 Loess soils are preserved in areas above active river channels. Depending on their position in the landscape loess soils vary in depth and can be greater than 10 m thick in parts of South Canterbury. Loess soils contain a fragipan (a layer with high bulk density and high strength when dry (Hewitt, 2010)) which, combined with other physical properties, tends to limit infiltration. 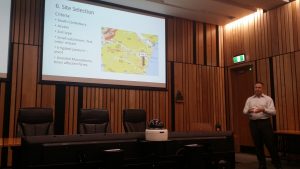 Hydraulic processes through loess soils are poorly understood, but they appear to behave very differently from many other common soil types in Canterbury, in that more runoff occurs. Environment Canterbury have previously attempted to model loess recharge (Scott, 2004; Thorley and Ettema, 2007; Aitchison-Earl, 2015) but there is uncertainty around how much and how water moves through these soils. Recently, Laurenson et al (2018) found run-off occurred after irrigation events via preferential flow paths in the A horizon, over the fragipan.

One aim of our study is to better understand spatial and temporal controls over hydrological fluxes in loess soils to reduce the uncertainty in Environment Canterbury recharge estimates. 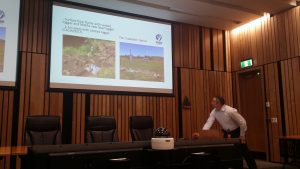 We defined selection criteria (e.g., land use, irrigation, soil type) to identify a representative field site near Otaio, South Canterbury. The field site is a 4.5 ha paddock with one valley and is used for dairy farming (no crops or winter feed) with centre pivot irrigation. Based on likely modelling requirements, we started to instrument and characterise the field site from January 2019. Current instrumentation includes a surface and subsurface weir at the valley floor discharge site, > 30 soil moisture probes, a piezometer, and a climate station. Characterisation so far includes soil auger holes, three detailed soils pits where soil profiles have been described and soil properties have been measured, and a high-resolution topographic survey via drone. We plan on extending this field work in Spring and early Summer 2019.

What are we finding?

To assist our analysis and interpretation of data we are developing a conceptual model of the field site. We understand that there is a minimum of two loess sheets present over gravels, approximately 4.5 m, thick in the valley. Soil pits indicate a moist A horizon with roots penetrating down into the soil horizons beneath. The A horizon thickens towards the valley floor. We hypothesise that most irrigation and rainwater will infiltrate into the A horizon and move laterally downslope into the valley floor and discharge via the valley exit. Our hypothesis if proven would have implications for how we model recharge and contaminant transport on these soils.

Technical meeting presented by Dr Eva Sutter from Cook Costello at the new Turanga Library. This event was kindly sponsored by Cook Costello who arranged the venue, provided the drinks and an amazing platter for the event.

Dr Eva Sutter has a range of work experience including a voluntary role with Groundwater Relief.  Further details can be obtained here: https://groundwater-relief.org/

Hydrogeophysics – An introduction to complimentary tools for hydrological studies 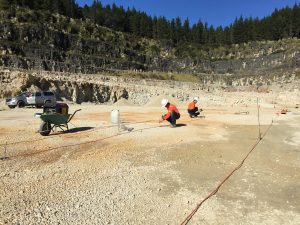 From the total 3 % of freshwater on Earth (97 % is saltwater), almost one third of the worldwide available freshwater resources are stored underground in aquifers, making up by far the largest source of liquid freshwater. Although better protected than surface water, aquifers are still vulnerable to contamination from natural and anthropogenic processes, especially the shallow, unconfined aquifer types. Increasing research attention is directed towards understanding groundwater related processes and ways of ensuring their protection in recent years. Governments have started realizing the importance of protecting groundwater resources from anthropogenic contamination and are putting measures in place for industry to monitor their impact on this important resource.

In order to gain a deeper understanding of groundwater resources, hydrology traditionally relies on the availability of point measurements such as precipitation records, groundwater levels and chemistry or soil moisture content. This builds a necessary and solid base of information, but often is far from being complete. Hydrological models provide a way of extrapolating this point information to a larger area. However, they suffer from non-uniqueness and the fact that the variability of the subsurface geology, structure and hydraulic properties are often poorly understood. In order to overcome these short comings extra information is needed. Hydrogeophysical methods can provide such information. 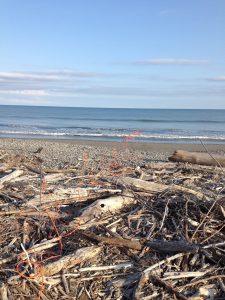 Although around for several decades, hydrogeophysics is still rather unknown or rarely used in the hydrological community. Often geophysical measurements are completely detached from hydrological measurements and only in recent years have efforts been made to focus on combining the two fields of expertise. This talk focuses on giving an introduction to what hydrogeophysics is, which methods can be used to answer specific hydrological questions, and will showcase some field studies I have been directly involved with in the past years. It is aimed to start (or continue) a discussion between professionals from both disciplines, geophysics and hydro(geo)logy, in order to generate an understanding of where the current needs are and how these can be addressed by using geophysics as complementary tools.

Past Events in Auckland

Hangjian Zhao of Williamson Water & Land Advisory (WWA) presented his recent research paper at the Auckland meeting. This event was kindly sponsored by Beca who provided the venue and the drinks for the event.

Stable isotopes of water are a conservative tracer that can facilitate the unique estimation of lake water-budget components. Isotope fractionation processes allow different water-budget components to be distinguished based on their isotopic compositions. Fractionation during evaporation, which preferentially removes the lighter isotopes, results in heavier oxygen-18 (18O) and deuterium (D) signatures in lakes compared with groundwater recharged by snow and rainfall. Conventional water budget methods can be coupled with an 18O mass balance model to quantify groundwater and surface-water interactions in such lakes. 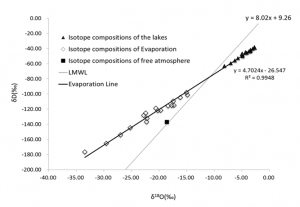 Jon Williamson and Hangjian Zhao of Williamson Water & Land Advisory (WWA) presented their recent research at the Auckland meeting. This event was kindly sponsored by Jacobs NZ Ltd who provided the venue and the drinks for the event.

Ruahuwai Decision Support Tool and its implication for the Plan Change 1 of the Waikato Regional Plan. 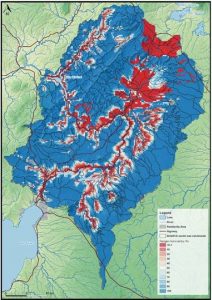 The Ruahuwai Decision Support Tool is a sophisticated catchment calculator designed by WWA for Wairakei Estate. It combines a series of coupled models that collectively predict hydrology and water quality outcomes throughout the Ruahuwai Sub-Catchment (an area that covers the upper portion of the Waikato River basin).

It is part of an adaptive management framework to model and predict changes in biophysical properties, climatic and natural capacity of the landscape to attenuate contaminant losses. For example, it has been used to assess relative changes in nitrogen losses into the groundwater within the catchment as shown on the figure, which shows nitrogen vulnerability (<0.1% is shown in red and >99% is shown in blue).

Further information can be obtained from the Wairakei Estate website: https://www.wairakeiestate.nz/sustainability/ruahuwai-decision-support-tool-rdst/

Technical meeting presented by Anthony Kirk and Zoë Pattinson from GHD. This event was kindly sponsored by GHD who provided the venue and the drinks for the event. 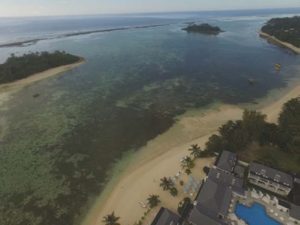 Synopsis: This popular tourist stop has in recent years seen extensive seaweed growth and degradation in water quality. A broad range of potential causes have been suggested, including changes to lagoon hydrodynamics, historical agriculture, commercial development and on‐site wastewater disposal.
As part of the Mei Te Vai Ki Te Vai (MTVKTV) project, GHD was involved in a detailed catchment and lagoon environmental investigation to identify the primary causes for lagoon degradation.

The IAH (Spanish Chapter (IAH-GE) and the centre of Hydrogeology of the University of Malaga (CEHIUMA) held their 46th IAH Congress in Malaga, Spain on 22 to 27 September 2019.

Theme – Groundwater in a Changing World

was held at Brisbane Convention & Exhibition Centre Queensland on 24 – 27 November 2019.