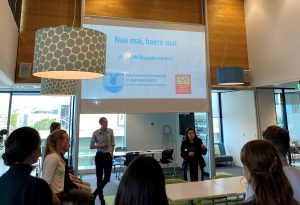 The inaugural ECHN Technical meeting was held on 22 October 2020 at GHD, 138 Victoria Street, Christchurch. Two speakers presented to a group of approximately 20 Early Career Hydrogeologists.  Details of the presentations are summarised below and can be downloaded in the following link.

Future presentations are planned on a quarterly basis.

‘Investigation of groundwater recharge and irrigation efficiency under
loess soil’ 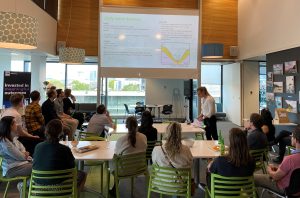 Background: Kate has over 15 years experience as a hydrogeologist with a background is in groundwater resource management and modelling. Her current role with Environment Canterbury includes conducting groundwater
investigations and providing advice on groundwater quality and quantity for regional planning, resource
consents, compliance monitoring and public enquiries. Prior to joining Environment Canterbury, she was a consultant hydrogeologist where she worked on a range of groundwater projects both in New Zealand and in Australia, including10 years with Rio Tinto in Western Australia.

Presentation: Loess soils cover approximately 5,606 km2 of land in Canterbury, representing 13% of land in the region. Yet, the hydraulic characteristics of loess soils are poorly understood, even though we know they behave very different from those of the stony and well-draining soils which are common on the Canterbury Plains.
The Collaborative Hillslope Project was established in 2018 to improve understanding of the spatial and temporal controls on water movement through loess soil. The project team consisted of team members from Environment Canterbury, NIWA, Plant & Food Research and Lincoln University. A 4.5 ha single hillslope basin (paddock) dominated by loess soils, located near Otaio, South Canterbury was chosen as the primary field site. The hillslope site was heavily instrumented and characterised with climate and rainfall gauges, surface flumes, piezometers, soil auger holes and soil moisture probes to allow us to measure as many of the water balance variables as possible.

‘Arsenic in the groundwater of Waitaha/Canterbury region’

Background: Andy has a PhD in geochemical analysis of speleothems (i.e., secondary cave carbonate deposits) for palaeo-environmental reconstruction (University of Waikato). Since completing his studies in 2020, Andy has primarily worked on groundwater quality; firstly, as a Groundwater Scientist for Environment Canterbury, then at the Institute of Environmental Science & Research (ESR).

Presentation: Arsenic contamination in groundwater affects tens of millions of people worldwide and is also
regarded as a major groundwater issue in Aotearoa New Zealand. Yet, region-wide, the occurrence and causes of
arsenic presence are relatively understudied in Canterbury, despite groundwater being the primary source of water for irrigation and drinking. This study was conducted to evaluate the connection between elevated groundwater arsenic concentrations and inferred redox state of aquifers across the Canterbury region using Environment Canterbury data. In total, 2,428 samples from 1,172 wells were analysed for arsenic concentrations, and compared against groundwater redox state, which was inferred using geochemical indicators for each well.